If you need help complying with sex offender registration requirements or you have been accused of a failure to register, it is in your best interest to retain legal counsel. Ciccarelli Law Offices fights to protect the rights of people accused of sex crimes in southeastern Pennsylvania.

Our West Chester criminal defense attorneys have offices in West Chester, Springfield, Kennett Square, King of Prussia, Lancaster, Malvern, Philadelphia, Plymouth Square, and Radnor. You can receive a free consultation that will let our lawyers review your case as soon as you call (610) 692-8700 today.

The reporting requirements could last fifteen years, or could remain in effect for the life of the offender, depending on the offense. If you are required to register with the Pennsylvania State Police as a sex offender, your family members, potential employers, neighbors and any member of the public can access your detailed personal information. This information will include where you live, what you drive, your physical description and the details of your criminal conviction. You will even be limited as to where you can work and live in the state.

In late 2011, Pennsylvania’s sex offender laws were expanded to involve longer registration periods, for a wider range of sex offenses.  The courts, however, have determined that some of those changes may have been unconstitutional, as the registration requirements were applied retroactively. Legislators in the matter claim the updated laws are not meant to be punitive, however, in practice, it appears they actually are punitive, and can prevent individuals from moving on with their life after serving their time in prison and complying with all other requirements of their sentence.

The Origin of Megan’s Law

Megan’s Law was named after a seven-year-old girl who was raped and murdered in 1994 in New Jersey—Megan Kanka. As a method of alerting parents and the public about any convicted sex offenders who may move into their neighborhood’s, Megan’s Law is a federal law, and has also been adopted by many states. While an accusation of a sex crime can have adverse effects on your reputation, a conviction can make it impossible for you to choose where you live, or have the normal freedoms most of us take for granted. Should you be required to register as a sex offender under Megan’s Law, if you fail to register, under the Adam Walsh Act, you have committed a felony offense.

Reporting Requirements for Sex Offenders in the State of Pennsylvania

The state of Pennsylvania currently has more than 19,000 registered sex offenders. The offenses these people have been charged with range from possession of child pornography to the rape of a child. Tier 1 offenders are those who have been charged with crimes like unlawful restraint, institutional sexual assault or corruption of a minor. These offenders are required to appear at a Pennsylvania State Police office every year for a period of fifteen years to have their photo taken.

Tier 2 offenders, in the state of Pennsylvania, are those who have been convicted for such crimes as unlawful contact with a minor, prostitution involving a minor or indecent assault. Tier 2 offenders must appear at a Pennsylvania State Police office two times each year, remaining on the sexual offender registry for 25 years. Tier 3 offenders (accounting for about 60 percent of those in the state’s sexual registry database) must remain on the sexual registry for life, and must have their photograph taken at a local Pennsylvania State Police office every ninety days, or four times each year. Tier 1 offenders have been convicted of a sexual offense such as aggravated indecent assault, incest or rape.

Regardless of which Tier you are in, you must undergo a psychological evaluation after your conviction; those who are deemed “high risk,” are placed in the category of sexually violent predators. In the state of Pennsylvania, about 13 percent of the 19,000 persons on the sexual offense registry are classified as sexually violent predators, and about two-thirds of that 13 percent are incarcerated.

A classification as a sexually violent predator will result in a mandated lifetime requirement to register as a sex offender. Anyone who is required to be listed on Pennsylvania’s sex offender registry must notify the Pennsylvania State Police within three days any time they make a change in their pertinent information. This includes changing jobs, changing addresses, selling or purchasing a vehicle, and even changing a phone number or e-mail address.

If you were convicted of a sex offense in the state of Pennsylvania prior to December 20, 2012, you have the option of mailing in a form which notifies law enforcement of any changes in your situation, however if the form is not received within three business days you could face possible prosecution. Pennsylvania law enforcement as well as U.S. Marshals often engage in spot checks to ensure compliance with the current sex offender registry laws.

A group known as Women Against Registry believe the sex offender registry laws actually damage our society due to “excessive, unconscionable sexual offense registries.” The group is based in Missouri, yet meet with lawmakers across the United States on a regular basis. The group claims that almost three million family members of the approximately 850,000 people on the sex offender registry across the nation, are adversely affected by the registry. The group also claims that the registry is difficult to supervise and lacks effectiveness.

The group believes that only sexually violent predators should be required to register, pointing to the many people whose offenses are relatively mild, yet suffer serious adverse consequences to their lives.  As an example, those convicted of sexting and urinating in public can sometimes be placed on the sexual registry list. 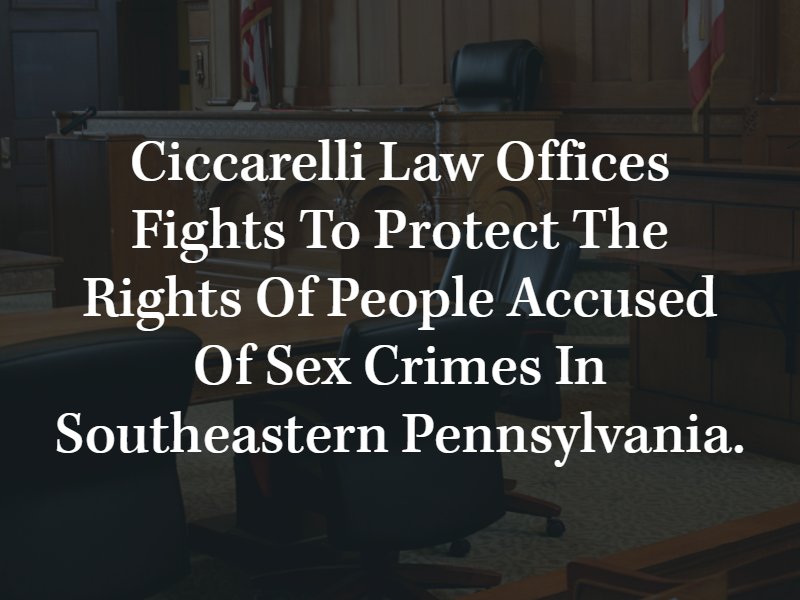 Sex offenders are required to provide certain forms of information when registering. Some of this information may be published in the offender’s listing on the Pennsylvania State Police’s website.

Information required during registration that is also published on the website includes:

It is important to note that sex offenders must appear in person at an approved registration site within three business days to report any change in name, residence, employer, school, vehicle ownership, lodging, internet identifiers, or licenses.

People convicted of Tier I offenses are required to register annually (once a year) for 15 years. Tier I includes the following sexual offenses:

People convicted of Tier II offenses are required to register semiannually (twice a year, or once every six months) for 25 years. Tier II includes the following sexual offenses:

People convicted of Tier III offenses are required to register quarterly (four times a year, or once every three months) for life. Tier III includes the following sexual offenses:

A.S. v. Pennsylvania State Police, J-36-2016 — The Pennsylvania Supreme Court decided this case on August 15, 2016, that Pennsylvania’s former sex offender registration statute, Megan’s Law II, “requires an act, a conviction, and a subsequent act to trigger lifetime registration for multiple offenses otherwise triggering a ten-year period of registration.” Megan’s Law II was succeeded by Megan’s Law III (Act 152 of 2004), which in turn was superseded by SORNA. The appellee pleaded guilty in October2001 to single counts of sexual abuse of children and unlawful contact with a minor stemming from the same incident.

Estimating the Impacts of SORNA in Pennsylvania: The Potential Consequences of Including Juveniles— View the full text of a research report submitted to the U.S. Department of Justice and supported by supported by a grant awarded by the National Institute of Justice. The project focuses on Pennsylvania’s version of SORNA and its December 2012 implementation one year after being signed into law. The report covers the evolution of the legislation, descriptions of sex offenders in Pennsylvania, and interviews with justice practitioners.

Are you being required to register as a sex offender in Pennsylvania or are you facing criminal charges for allegedly failing to comply with sex offender registration requirements? Ciccarelli Law Offices helps clients all over Philadelphia County, Chester County, Delaware County, Lancaster County, and Montgomery County.

Our West Chester criminal defense attorneys work as a team to get the most favorable outcomes for people who have been accused of sex offenses or sex offender registration violations. Call (610) 692-8700 or complete an online contact form today to have our lawyers provide an honest and thorough evaluation of your case during a free, confidential consultation.

Getting the Help You Need

If you are facing charges which could potentially result in your being placed on the sexual registry list, it is essential that you take action right now to try and prevent that. Speaking to a Pennsylvania criminal defense attorney could result in a much more positive outcome from your charges as well as a much brighter future for you and your family