What Is A Sex Crime

What Constitutes a Sex Crime in Pennsylvania?

Left in the wake of sexual offenses and sexual violence are disrupted families, shattered lives and frightened communities. Because of this, nearly every state in the U.S.—including Pennsylvania—has increased the penalties for sex crimes. While no one would advocate that those who commit sex crimes should receive no punishment, unfortunately, the laws currently punish even minor sex crimes extremely harshly, including mandated registry on the sexual offender list. There are also times when allegations of a sex crime are false, and an innocent person’s life and future can be completely ruined. 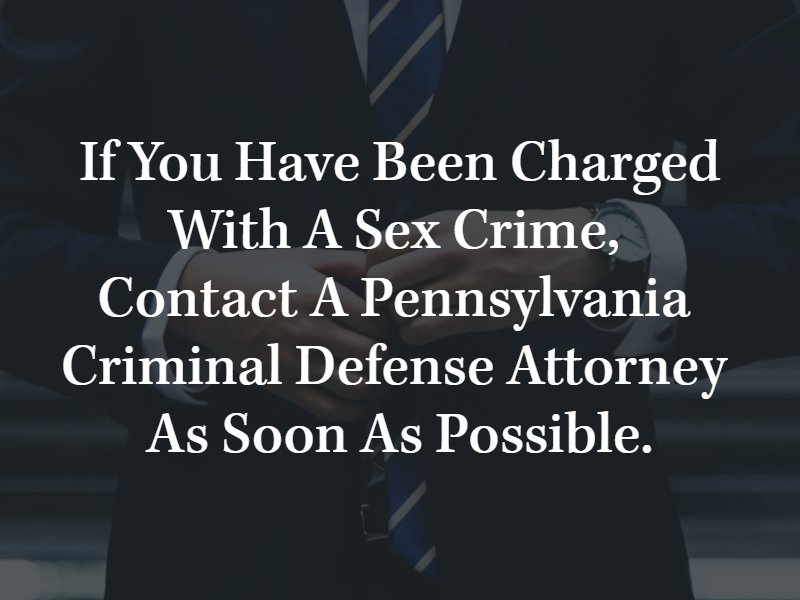 What are Sex Crimes?

In the state of Pennsylvania, a sex crime is one which causes another person—whether due to force or to a threat—to engage in an unwanted sex act. Sex crimes which involve crossing a state line are likely to be prosecuted federally, and will almost certainly have more severe penalties. Sex crimes include rape, prostitution, sexual assault of a child, voyeurism, public indecency, pandering, illegal possession of pornography and other lewd acts. As police techniques become more and more sophisticated, Internet sex crimes and possession of child pornography are more likely to be prosecuted as well. Specifically, the following behaviors are considered criminal offenses in the state of Pennsylvania:

§     Sexual intercourse with an animal;

§     Forcing a child into prostitution;

§     Sexual exploitation of a minor;

§     Failure to register as a sex offender, or

Those who are charged under federal statues could be charged with the following:

§     Activities relating to the sexual exploitation of minors;

§     Transporting an individual with the intent of forcing that individual to engage in illegal sexual activities such as prostitution;

§     Interstate or foreign travel with the intention of engaging in a sex act with a minor;

§     Using interstate facilities to transmit information about a minor under the age of 16, with the intention of enticing, encouraging, offering or soliciting the minor to engage in any criminal sexual activity.

Registration as a Sex Offender

The state of Pennsylvania requires those convicted of a sex crime to register their personal information, and to update that information either once a year, once every six months, or once every three months, depending on the level of the offense (Tier I, Tier II or Tier III). Sex crimes such as luring a child into a motor vehicle, incest, unlawful contact with a minor, obscene materials shown to a minor and indecent assault will require a 10-year registration, while sex crimes involving violence and children, incest when the victim is under the age of 12, aggravated indecent assault and repeat offenses may require lifetime registration. While some sex crimes involve the use of force or the threat of force, others are crimes even when there is no force used, because the victims are not legally able to consent. A disability on the part of the victim can also prevent consent.

Just as there are few things worse than a rape or the sexual assault of a child, the person who is falsely accused of such a crime can face extremely adverse changes to his or her future just by the very accusation. If you are convicted as a result of the false allegations, you could face prison time and could be required to register as a sex offender—in other words, your life as you know it would be over. You would find it difficult to find employment, rent a home, obtain a professional license, and could be prohibited from working with children—or living near a school, in some cases—or from owning a firearm. If you wanted to go to college, you could be prohibited from obtaining a government student loan. In other words, your life would change in every conceivable way.

Some things to remember about false allegations of a sex crime:

§     If you are being accused of a sex offense with a child, there is absolutely nothing you could say which will convince CYS or law enforcement that you are innocent of the crime.

§     Talking to CYS, the police, or virtually anyone without your attorney is a very bad idea, and perhaps the worst thing you can do for your future.

§     Trying to talk to the alleged victim is also one of the worst things you can do. While you may only want to “straighten things out,” the police will say you were intimidating your victim.

§     Believing sanity will intervene at some point, and agreeing to give written statements to the police or CYS or talk to caseworkers or detectives can result in your statements being taken out of context and used against you during your trial.

§     Even the most innocuous question can turn ugly—as an example, the investigator could ask you if you have ever changed a diaper or given your child a bath. Of course, the answer to that question is “yes,” but as soon as you answer in the affirmative, the questions will focus on whether you have ever touched a child’s genitals inappropriately.

§     Remember—if you don’t talk, your words cannot be twisted.

If you have been charged with a Pennsylvania sex crime, contact a Pennsylvania criminal defense attorney as soon as possible. Whether you made a one-time error in judgment or whether you are entirely innocent of the charges, don’t leave your future to chance.