Driving under the influence is something we know is wrong, yet sometimes we push the limits of what is legal and what is not. It is human nature to make mistakes – even a mistake as big as driving drunk. Lancaster police take driving under the influence very seriously and look for opportunities to punish drivers who test the boundaries of the state’s DUI laws.  Are you facing a DUI or DUI related offense in Lancaster PA?  Are you looking for answers?  Are you looking for a reasonable DUI attorney in Lancaster County?

If police have charged you with driving under the influence in Lancaster, seek help from our trusted Lancaster criminal defense attorneys. Come to Ciccarelli Law Offices for an experienced and assertive DUI legal team for a free case evaluation.  Contact us by email, live chat or call us at (717) 291-9400.

Why Fight a DUI?

Regardless of your BAC level or other evidence against you, it is possible to fight a DUI charge in Lancaster. It is always a good idea to speak to a defense attorney in your local area after police arrest you for DUI/DWI. Police are not on your side, and they may not explain your rights. An attorney works for you, not the courts or the police. A lawyer can listen to your story and give you trustworthy advice about what to say and do to minimize or erase the charges against you.

Fighting a DUI charge can be the only way to avoid the serious consequences that come with breaking the states alcohol-related laws. It can give you a second chance at a clean future and prevent you from obtaining a permanent record.

If you don’t deserve the charges against you, it can clear your name and reputation. It can be difficult to win a DUI defense case, but a good lawyer can at least try to talk down the penalties against you. Hiring an experienced defense attorney is well worth the cost and effort compared to receiving harsh penalties for driving under the influence.

Lancaster is a large city, accounting for 2.62% of all the state’s highways and 3.61% of the state’s local roads and streets. It also made the top 10 cities for the most reported traffic crashes, making up 4.4% of the total. According to the most recent statistics, there are around 533,320 people living in Lancaster County, Pennsylvania. In 2015, there were 1,486 misdemeanor new cases for DUI or driving while intoxicated (DWI) in 2015 in Lancaster. This represented 29.3% of all new criminal cases in the county that year, a slightly higher share than the state of Pennsylvania as a whole.

The prevalence of DUI cases in Lancaster County shows a need to improve awareness and education of this dangerous habit. Many people assume they won’t get into accidents or mistakenly believe they aren’t too drunk to drive. The reality is that just one alcoholic beverage can be enough to impair driving.

After consuming any amount of alcohol, you could be liable to receive a DWI charge in Pennsylvania. Police can make an arrest for many things other than a BAC over the legal limit, such as slurred speech or impaired behaviors. Police are strict about DUI/DWI in Pennsylvania in the hopes of preventing alcohol-related crashes and deaths.

According to Mothers Against Drunk Driving (MADD), 364 people died in drunk driving accidents in Pennsylvania, the most recent year data is available. This represents 30% of all traffic deaths that year (an increase of 4.3% from the previous year). The same year, there were 44,615 DUI arrests across the state. Statistics for Lancaster County come from the DUI Council and are as follows:

Impaired driving remains a major safety issue in Lancaster County and throughout Pennsylvania. Across the state, there were 10,558 alcohol-related car accidents in 2015. Those at the highest risk for these kinds of accidents are males between the ages 21 and 30. A concerning 18% of impaired drivers were under the age of 21. Alcohol remains the substance of choice for teenagers, leading to a high number of teenage DUI/DWI offenders.

As a teen or an adult, a DUI or DWI conviction can seriously impact your life. It can lead to suspension of license, thousands of dollars in fines, and even ramifications like the loss of your job. The best way to avoid a DUI is, of course, to not drink and drive. After seeing how many injurious and fatal accidents occur this way every year, you may think twice about getting behind the wheel impaired. However, if you’re already facing a DUI or DWI charge in Lancaster County, learn your rights and potential legal options.

Stages of a DUI Case

Pennsylvania residents should know what to expect from a DUI case. A DUI is a serious offense with increasingly harsh penalties for multiple offenses. Typically, a DUI charge will lead to fines, license suspension, mandatory traffic safety and drug counseling, and possibly jail time. Repeat offenders will face greater punishments with subsequent convictions.

Every state adheres to the legal limit of .08% blood alcohol concentration (BAC) for drivers 21 and older, the minimum age to buy and consume alcohol. Any detected amount of alcohol, even below .08%, will lead to a DUI charge for a driver under the age of 21.

If a police officer stops you and requests you to take a chemical test, such as a breathalyzer, you will receive a DUI charge if your test result is .08% or more. It’s important to note that the officer must have probable cause to stop you and conduct a chemical test. For example, if the officer observes you swerving between lanes or engaging in erratic behavior behind the wheel, he or she would have cause to pull over your vehicle and investigate.

Traffic stops are common in densely populated areas or areas where DUI is common. For example, some jurisdictions set up traffic stops on holiday weekends in anticipation of drivers getting behind the wheel after an evening of alcohol consumption. Whether an officer stops you at one of these DUI checkpoints or for another traffic violation, if the officer suspects you have been drinking, he or she will more than likely administer a chemical test.

After an arrest, a DUI suspect will go to booking at the police station. The police will take a mugshot and the suspect’s fingerprints. In some circumstances, the suspect will be free to go after booking until his or her court date.

If the DUI arrest resulted from a serious accident or other criminal activity, the suspect will likely remain in custody until arraignment. The court will set a bail amount based on your past criminal and DUI record, your job, your standing in the community, and the likelihood that you will attempt to flee instead of appearing for your court date. If the court sets bail and you can pay it or secure a bond to cover it, you will be free to go until your court date.

The trial or hearing will eventually lead to a verdict. An individual convicted of a DUI will face fines, driver’s license suspension, may need to attend a mandatory substance abuse course or driver safety course, or both. Penalties vary by jurisdiction, but they always increase with repeat offenses. Those convicted of felony DUIs or multiple DUIs will likely face jail time as well as the aforementioned penalties. Anyone charged with a felony DUI should make every effort to retain a reputable DUI defense attorney.

In 2003, Pennsylvania legislature passed Act 24 into law. Act 24 lowered the legal BAC limit from 0.10% to 0.08% and created a tiered approach to DUI law enforcement and penalties. The new DUI law focuses on treatment for first-time DUI offenders in the hopes of preventing repeat offenders.

Since Act 24 went into effect on September 30, 2003, the penalties for DUI and DWI in the state of Pennsylvania (first offense) are as follows: 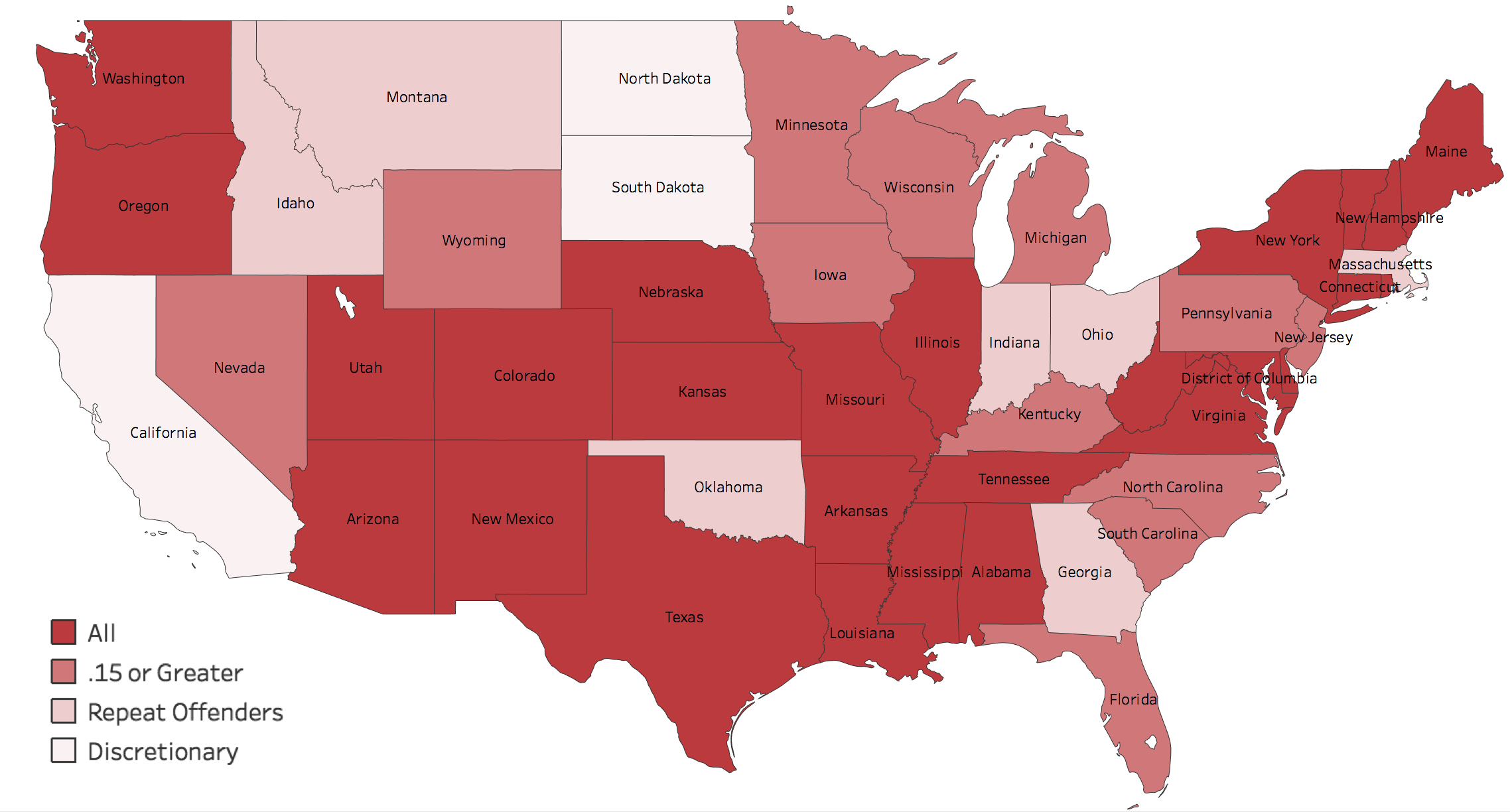 Source: MADD
If an impaired driver causes property damage or personal injury, he or she may be subject to more severe DUI penalties regardless of BAC level. This is also true for impaired bus drivers, commercial vehicle drivers, and minors. Pennsylvania has a Zero Tolerance law for underage drinkers and drivers. Anyone with a DUI under the age of 21 faces a one-year license suspension, two days to six months in jail, and fines of $500 to $5,000.

Pennsylvania operates under an implied consent law – all drivers give their implied consent to take chemical tests for alcohol when they receive their driver’s licenses. Refusal to take a blood, breath, or urine test when an officer commands you to do so can result in automatic penalties of one year license suspension for a first offense, as well as fines of up to $300 and taking a mandatory alcohol treatment class. A judge also has the right to sentence you to up to 150 hours of community service.

If the courts later convict you of a DUI, even without the results of a chemical test, you will have to accept the penalties for the DUI and refusal of the test. If you were involved in an accident that caused serious injury or death, refusal to take the test could result in the highest possible DUI penalties.

It is often not in your best interest to refuse to take a chemical test. Remember, you have the right to call a lawyer directly after your traffic stop to ask for legal advice in your specific situation.

Since the Supreme Court of Pennsylvania’s decision in Com. v. Tarbert (1987), sobriety checkpoints (also called roadblocks) are legal in the state, despite the Constitution requiring law enforcement to have probable cause to make a traffic stop. The Supreme Court ruled that drunk driving is so dangerous that it outweighs the intrusion factor of sobriety checkpoints. This means police can conduct traffic stops to find intoxicated drivers without individual suspicions. The locations of sobriety stops are temporary and chosen at random.

During a sobriety checkpoint, all drivers must come to a complete stop. Police may briefly detain and interview drivers. At this point, police may subject suspicious drivers to chemical or field sobriety tests. If an officer charges you with DUI/DWI at a sobriety checkpoint, the protocol and consequences are much the same as an ordinary stop. However, the officer will likely not have evidence against you such as a swerving vehicle or broken roadway rule.

It may be possible to defend against a DUI from a checkpoint by challenging the legality of the stop. Although the Supreme Court ruled roadblocks legal, law enforcement must obey strict rules for conducting these stops. If police officers break any rules or protocols during the stop, the court may have to rule the evidence gathered inadmissible. Examples may include officers failing to follow a uniform procedure in choosing vehicles to stop, ignoring the safety of drivers, or violating the driver’s constitutional rights to privacy at any time.

Need to Fight a DUI in Lancaster? We Can Help

Regardless of the circumstances of your DUI/DWI charge, call the dui attorneys at Ciccarelli Law Offices for a free consultation. We want to hear your story and potentially offer our services in your defense. Don’t assume an officer’s evidence against you is too great to talk down or avoid a DUI conviction. Only a DUI legal team can assess your situation and decide your chances for a successful defense. Our Lancaster County DUI attorneys have offices at 313 West Liberty Place, Lancaster PA 17603 and have represented individuals accused of drunk driving and DUI crimes throughout Lancaster County, including: Lancaster, Ephrata, Elizabethtown, Columbia, Lititz, Millersville, Willow Street, Mount Joy, Leola, New Holland, Manheim, East Petersburg, Akron, Denver, Maytown, Reamstown, Brownstown, Strasburg, Mountville, Salunga, Marletta, Quarryville, Swartzville, and Bowmansville. Call our Lancaster office at (717) 291-9400 to schedule your consultation.