Charges For Resisting Arrest In Pennsylvania

While being arrested, detained, and charged with a crime is a headache in and of itself, resisting arrest complicates matters further. Those deemed to have resisted arrest are subject to heavier penalties on top of those they have already incurred from whatever crime they are convicted more. In any case, a West Chester criminal defense attorney from Ciccarelli Law Offices is ready to answer any questions and concerns regarding arrest resistance.

What Is Considered Resisting Arrest? 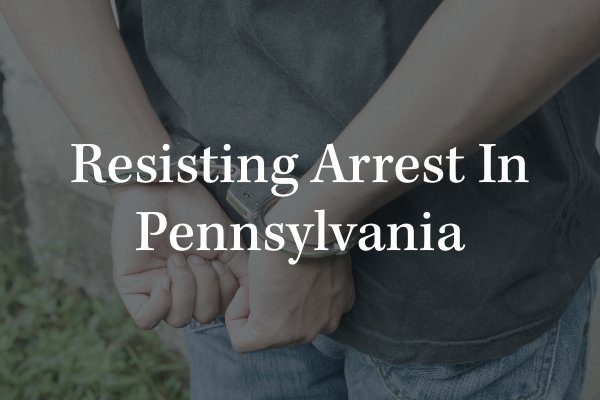 In certain cases, it is not always clear exactly what does and does not fit into the definition of the charge. In order to convict someone of resisting arrest in the Commonwealth, the prosecution must prove certain criteria beyond a reasonable doubt in a court of law.

Resisting arrest is a common charge for those who do not want to be captured by law enforcement. Some examples of actions that would classify as resisting arrest include running away from police officers, physically hitting law enforcement while they are trying to detain someone, or responding to the arrest with the use of a weapon.

Penalties of Resisting Arrest in Pennsylvania

The State of Pennsylvania takes resisting arrest quite seriously, and the penalties are serious enough to greatly impact someone’s ability to maintain the same freedoms that they had before the charge. Should someone be convicted of resisting arrest, they would be charged with a second-degree misdemeanor. While this is not a felony, it still carries serious implications.

Maximum penalties for a second-degree misdemeanor of resisting arrest in Pennsylvania include two years of jail time and $5,000 in fines. These penalties are merely added on top of any previous charges that someone is convicted of, however. Being found guilty of resisting arrest on top of other charges can have damaging results on someone’s livelihood.

The Aftermath of a Resisting Arrest Charge

It may be the case that, with the help of experienced attorneys, someone is ultimately not convicted of resisting arrest in Pennsylvania. This would be the case should one of the above criteria for resisting arrest not be met. Lawyers may furthermore be able to defend their client’s case in a court of law by using defenses such as self-defense and unlawful arrest. In some cases, it may be proven that the cops did not perform their duties in a lawful manner or threatened the defendant’s life in one way or another.

All in all, the weight of a resisting arrest charge is heavy and falls on the shoulders of the accused. It is necessary to have tried and trusted lawyers on one’s side going into a court case such as this one. Contact a West Chester criminal defense attorney from Ciccarelli Law Offices today at (610) 692-8700 to learn more about your options after being convicted of resisting arrest.