The Difference Between Divorce, Annulment, and Legal Separation

When two people can no longer stand to live as a married couple, they have three main options for ending the marriage in Pennsylvania: legal separation, annulment, and divorce. During the beginning stages of the break up, you may hear all three words get tossed around in conversations with your spouse, friends, or legal professionals. You need a firm understanding of all three to decide which option is best for your particular relationship. Here are the basics: 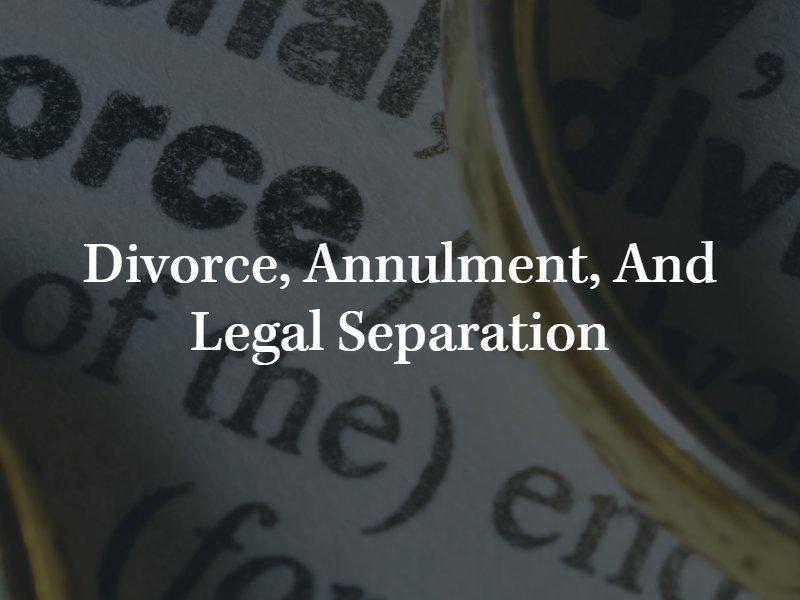 A legal separation does not officially end a marriage. The parties are still legally married and cannot remarry or enter into domestic partnerships with others. Legal separation is a reasonable choice for couples who aren’t ready to get a divorce but who want to live separately and decide on issues such as custody and asset division. Some couples prefer legal separation to divorce if potential reconciliation could be in the future. Others avoid divorce for religious reasons or to retain benefits such as health insurance. During legal separation, you can ask a judge to decide on all the same issues as in a divorce, but you will still be legally married.

A legal annulment does not end a valid marriage, but rather declares that the marriage never existed in the first place. An annulment may be appropriate if something made the marriage invalid or never officially legal. For example, if one spouse was already married at the time of the second alleged marriage. The Pennsylvania courts may declare a marriage void and grant an annulment request if the spouses are under the age of 16 and lack parental consent, either party was under the influence at the time of marriage, either party was incurably impotent, or if either party entered into the marriage due to coercion or fraud.

A divorce legally dissolves a marriage. After the finalization of a divorce decree, the law no longer binds the two parties together. They are free to marry others or enter into domestic partnerships. During a divorce, the parties or the courts will have to decide on elements such as child custody, child support, asset division, and spousal support. To acquire a divorce in Pennsylvania, you must fulfill the following requirements:

• You must be legally married or in a common law marriage.

• You or your spouse must have a residence or domicile in Pennsylvania.

• The party seeking divorce needs grounds for the divorce, described in a Divorce Complaint document.

• Divorces can be fault or no fault in Pennsylvania. This means a party can file for divorce due to “irreconcilable differences” or because the other party did something wrong, such as adultery or a felony conviction.

You may want a divorce if you wish to be legally single and free to marry or become a domestic partner again. You may also want to choose divorce if your relationship involves issues such as domestic violence or tricky division of property, in which you need a judge or legal processes to intervene and settle disputes.

Which Is Right for You?

A conversation with you, your spouse, and a legal professional can help you choose between these three options. You may think you want a divorce to finalize the dissolution of marriage, when in reality a legal separation or annulment would be a better choice for your situation. Speak with a family law attorney for legal counsel before making your choice. Contact us online or give us a call at (610) 692-8700 to book a personalized consultation.