In 2015, the Pennsylvania Supreme Court declared mandatory minimums to be unconstitutional and unenforceable. However, two years later, state legislators – led by representative Todd Stephens – are heavily pushing for a revised, reinstated version of the law, citing the growing opioid epidemic as a primary driving factor.

Included in the proposed bill, is the highly controversial and highly questionable school zone provision.  This provision triggers anytime a drug offense occurs:

The school zone provision in particular is one of the most unfair parts of the mandatory minimum law, because it makes no distinction for time of day, where the offense occurs, or whom is involved.  In fact, someone arrested selling drugs inside of their own home at midnight would be subject to mandatory minimum sentencing if their home falls into one of the school zones.

It’s one thing, however, to mention an arbitrary area around schools and deem it unfair, but we need to be able to visualize the issues in order to truly understand the impact bringing back mandatory minimums.  So we turned to 1Point21 Interactive for help.

By combining Philadelphia drug arrest data from 2006 – 2016 with geospatial analysis and projections, we can show people exactly what the issue looks like.

So, What does a 1,000 foot school zone actually look like?

On a micro level, this satellite image displays the coverage of a typical drug-free school zone in an urban neighborhood of Philadelphia – in this case Isaac A. Shephard Elementary School. This is a surface area that encompasses nearly 18 densely populated residential blocks. 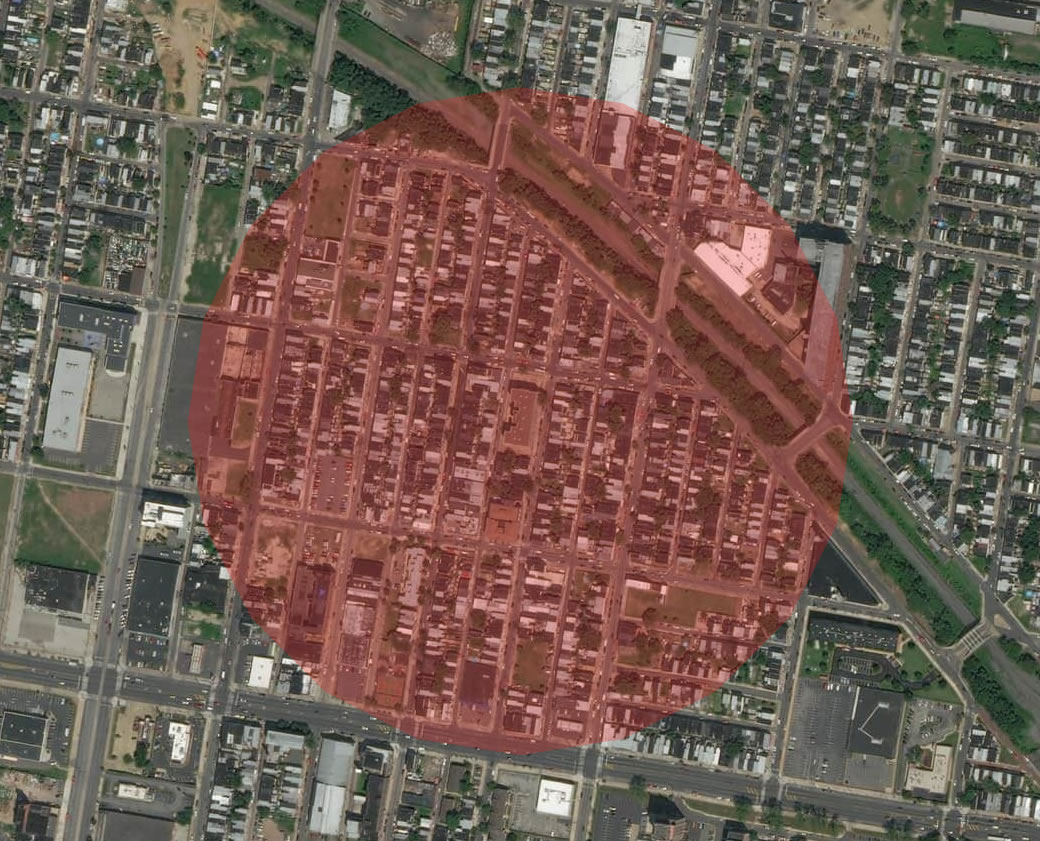 That’s just one school.  When we apply a 1,000 foot buffer to every school in the city, we find that 65 percent of Philadelphia is covered by a drug free school zone.

Use the slider on the image below to see exactly how much area the school zones cover. Red circles represent 1,000 foot zones around schools, dark dots are drug arrests from 2006-2016.

Considering that this does not take into account bus stops, playgrounds, and recreation centers (all which would require a 250 foot zone around), the drug free zones may end up overlapping and covering nearly all of Philadelphia.

Given their omnipresence, it should come as no surprise that most drug arrests fall into these zones as well. Of the 134,704 narcotics arrests  that took place from 2006 to 2016 – displayed in black on the slider above, 84,956 occurred within the proposed drug-free school zones – 63% of all drug-related arrests in the Philadelphia metro area.

Due to the natural distribution of schools and the city’s population, the concept of drug-free school zones unfairly targets people who:

This targeting of minorities is made especially evident when we overlay the proposed drug-free school zones with a map of U.S. Census tracts in Philadelphia. More intensely purple areas represent higher concentrations of people of color.

Again, use the slider to see the distribution of school zones over the demographics of Philadelphia census tracts.

Drug Free School Zones as a Preventive Measure for Minors

Intended to deter drug dealers from selling their wares to children, these drug-free school zones seem to have a minimal effect at that, according to our analysis. 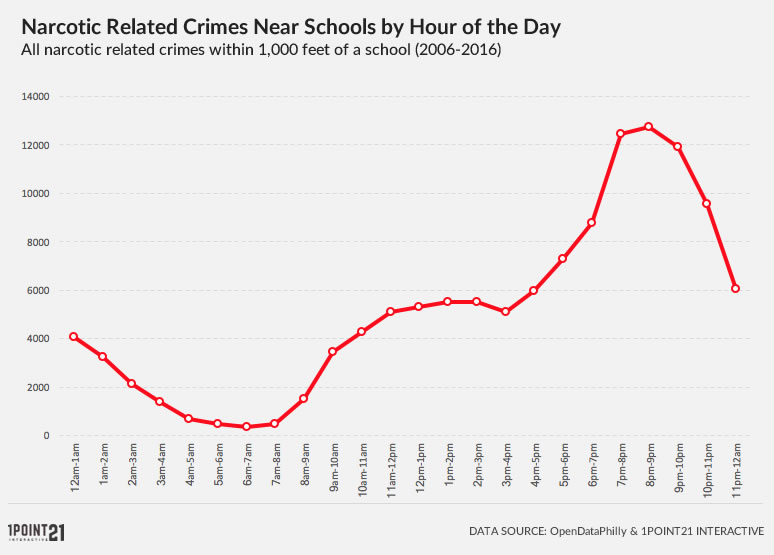 Drug-related arrests remain fairly consistent during the standard school day, with incidences increasing gradually through the morning, and then holding consistent from 11am-3pm, before increasing significantly through the afternoon – when kids are out of school. With the majority of drug-related crime occurring after school ends, this certainly brings into question the overall viability and effectiveness of using drug-free school zones to minimize exposure to minors.

In addition, during 2016, the first full year that mandatory minimums were not enforced, there was virtually no change in the percentage of drug arrests within these school zones.

Why Does this Matter to Us?

Through our work, we have seen a system that already has too much power to bully defendants into plea deals – even without mandatory minimums being enforced.  We’ve seen peoples lives ruined without the context of what happened being taken into account. The ability to mitigate charges and tell a client’s story is the only way to offer fair punishment commiserate with any crime, but specifically the type of crime that would fall under the mandatory minimum school provision.

Take the story of Jane Doe, a current client and 20 year old former student at a nearby community college.  She was found to be in possession of a total of 10 marijuana brownies and was ultimately arrested and charged with PWID (Possession with Intent to Distribute) for allegedly selling brownies on campus.  Based on her admissions and evidence on her phone, the commonwealth is moving forward with a PWID (Felony) charge. Currently, the sentencing guidelines on this case are RS-1(Restorative Services Level 1); for Jane, even worst-case scenario should end in a probation sentence.

Under a mandatory minimum regime, Jane would instantly be facing a mandatory 2 year, state penitentiary sentence.

We are currently working on getting Jane an offer that does not include a plea to the felony. District Attorneys tend to work with us on cases like this because they know that putting a 20 year old girl in jail, for 10 weed brownies, is completely ludicrous. A  Judge most certainly would sympathize with our client and the DAs know this, putting us in a much better position to negotiate. The moment that power is taken from the Judge and given to the DA, these cases will change for the worse. They will lose all incentives to make offers or even negotiate with defense attorneys.

There is simply no just reason for mandatory minimums to be brought back.