Many people have ideas of what burglary charges are and what the penalties for burglary might be. Often, burglary is confused with robbery when in reality, these two crimes are very different. If you or somebody you love is facing a burglary charge, it is important to understand the charges and what the potential consequences are.

If you have any additional questions, Ciccarelli Law Offices and speak to a burglary attorney. We have locations throughout Pennsylvania and offer free case evaluations (610) 692-8700

There are four types of burglary charges characterized by “degrees,” and they all carry different penalties. Burglary refers to the criminal offense of “breaking and entering” into a building illegally with the intention of committing a crime. The following degrees of burglary breakdown the different factors they need to be proven against an alleged suspect for them to face charges. 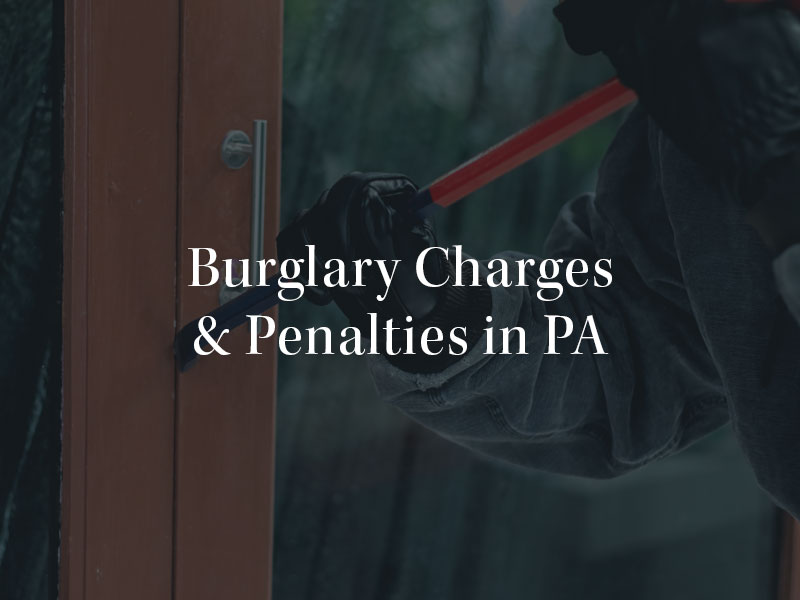 This is the most serious type of burglary charge a person can face. First-degree burglary involves unlawfully entering or staying inside of a building with the intention of committing a crime against a person or the property within the building. If you are armed with a deadly weapon or assault anyone when entering or leaving the building, you will likely be charged with first-degree burglary.

If you break into and unlawfully enter a building unarmed with the intention of committing theft or violence, you could face second-degree burglary charges. This charge can vary depending on several factors, including:

Third-degree burglary charges can apply for the act of unlawfully breaking and entering into a building, even if nothing has been stolen or no violence has been committed. Here, the “intent” to steal after unlawfully entering the property is enough to warrant a third-degree burglary charge, but this charge can apply even when theft was not the intention (domestic cases).

Fourth-degree burglary is the only burglary charge that is considered a misdemeanor and not a felony. This charge applies to stealing from areas that are connected to businesses or homes that are fenced in. There are even times when unlawfully breaking and entering into a person’s yard without the intent to commit a crime is enough for this charge to apply.

In addition to prison time for burglary charges, those found guilty will also face a range of fines, possible probation time upon completion of a sentence, community service, restitution fees, and more.

If you or somebody you love is facing a burglary charge in Pennsylvania, you need to seek legal assistance as soon as possible. A guilty conviction for burglary charges can come with severe penalties. When working to prove burglary, prosecutors will need to provide evidence that you intended to commit a crime when you entered a structure. Your attorney will explore various defense routes for your case in order to get the charges against you reduced or dismissed completely.