A dram shop, or dramshop, is an establishment that serves and sells alcohol to patrons. As drinks containing alcohol are controlled by the government, there are many rules and regulations that surround the bars, clubs, and restaurants that sell them.

As there are potential legal consequences to the excessive selling of alcohol to intoxicated patrons, it is important for businesses and patrons alike to be aware of the law. Contact a West Chester criminal defense attorney from Cicarelli today to learn more.

Why the Stress on Pennsylvania Dram Shop Laws?

One of the primary reasons there is such stress on dram shop laws in the Commonwealth of Pennsylvania is that the establishments that serve alcohol may be responsible for certain illegal actions performed by patrons intoxicated there.

For example, should an inebriated individual start a fight in a bar that ends up injuring other patrons who, in turn, sue the bar, could be held partially or fully responsible for their injuries from a legal standpoint? Similarly, a patron who has caused a car accident while drunk could pin a portion of the blame on the dram shop they were drinking at. Dram shops, being found partially at fault for their part for their role in damage that occurred by their patrons, may face heavy fines. 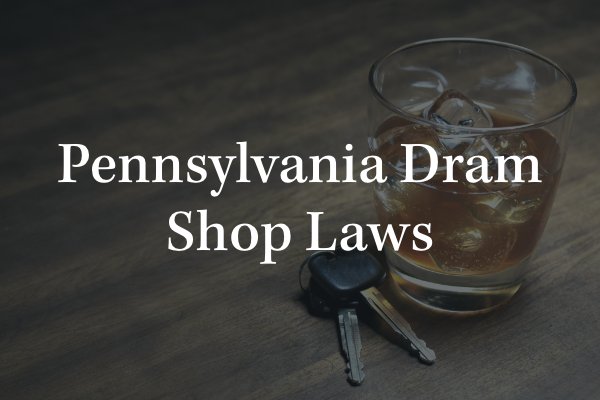 Pennsylvania makes it clear – any establishment or licensed individual who gives alcohol to a visibly intoxicated individual may be held legally responsible for damages that individual may cause. This includes nightclubs, bars, restaurants, private bartenders, event venues such as a theater, catering service, and more.

Should someone be visibly intoxicated, dram shops are recommended to cut them off and prevent serving them further. Indications of intoxication used by dram shops to identify an overly-intoxicated paton include slurred speech, slow reaction times, stumbling, use of non-cohesive speech, failure to use fine motor skills, and more.

In order for the dram shop law to be fulfilled, causing the dram shop to be held liable for damages, two specificities must be met. First, the establishment has to have made the decision to serve someone who was “visibly intoxicated”. Finally, this service of alcohol and further intoxication has to have directly caused damages, including damage to property or physical bodily harm.

The philosophical reasoning behind the liability of a dram shop in a situation such as this one is that the establishment acted negligently in serving alcohol to patrons. As a patron becomes inebriated and is less likely to be able to control their consumption of alcohol themself, the responsibility may fall to the bar or restaurant they are drinking at.

Who to Turn to for Help in West Chester, Pennsylvania

An alcohol-serving establishment, intoxicated offender, and physically injured individual are all examples of parties that may be involved in a legal web of complexity after a serious accident. This is why it is important to enlist the help of a West Chester criminal defense attorney from the Ciccarelli Law Offices. Our lawyers are experienced and offer a number of support services to give our clients the best legal experience possible. Call us today at (610) 692-8700 or send us a message through our online contact form.