Recently, it has been observed that users of Facebook are going live while behind the wheel. Being on Facebook Live while driving has backfired several times on the driver. There was an incident last year when a Florida motorist, Whitney Beall was arrested for allegedly using Periscope while driving drunk. She even titled her live stream “drunk girl driving” and someone called 911 and was able to get the police to find her location.

As officers attempted to pull over the driver she hit the curb with her front tire. Officers said that they smelled alcohol on Beall after she was pulled over, her speech was impaired and her eyes were glossy. She failed the standardized field sobriety tests but refused the breathalyzer test. Beal was arrested and charged with driving under the influence.

In Rhode Island, Onasi Olio-Rojas was driving over 100 mph and got seriously injured in an accident while streaming on Facebook live. Rescuers had to remove Rojas from the car and he was in critical condition. 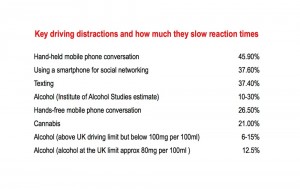 Being on Facebook live and driving can cause serious personal injuries to drivers, passengers, and other vehicles. Be smart when driving and do not become distracted by your phone. Everything on your phone can wait until your car has come to a complete stop and been turned off.