What is The 2-Hour Drinking And Driving Rule?

While someone may assume that the worst is to come in regard to their DUI case, there are certain circumstances in which law enforcement negligence and oversight may lead to a case dismissal. This case-by-case scenario is best assessed and pursued by experienced West Chester DUI attorneys, such as those working at the Ciccarelli Law Offices. 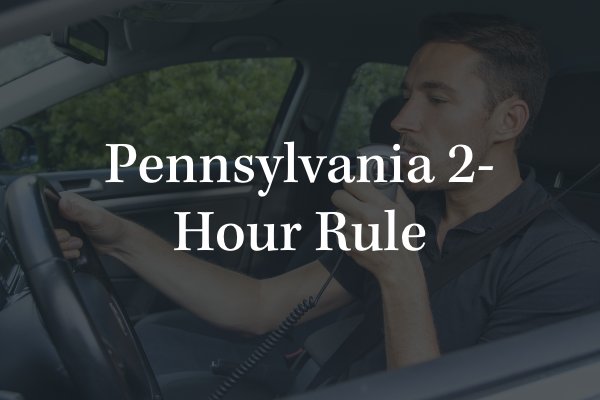 Where Does the 2-Hour Rule Apply?

The Commonwealth of Pennsylvania, like all other states in the US, has a legal limit on the consumption of alcohol and subsequent operation of a motor vehicle. The legal blood alcohol content (BAC) in Pennsylvania is .08%, meaning that most people are able to enjoy four to five standard alcoholic beverages before getting behind the wheel. Violating the established legal limit for alcohol results in a driving under the influence (DUI) charge. Yet, even though there is an established legal limit, the violation of said limit must be established by law enforcement within a reasonable amount of time.

The 2-Hour Rule is one that was written into Pennsylvania Motor Vehicle Code Title 75 § 3802, which spells out the amount of time that police officers legally have to test someone for alcohol. According to the official Motor Vehicle Code, law enforcement agents have to conduct a test that measures someone’s BAC within two hours of operating a vehicle.

Pennsylvania has taken such measures in order to establish integrity in the conduct of such an incriminating test and establish reasonable reliability in the results of the chemical examination of someone’s blood. Failure to do so may result in the complete dismissal of a DUI charge. In effect, the court does not believe that it can reasonably determine that someone has broken the law unless the tests determining so were conducted honestly and fairly.

Although there is a good chance that someone could get their charge dismissed by a court with the help of an attorney if law enforcement officers have broken the 2-Hour Rule, there are cases in which exceptions are made. The most commonly cited exceptions presented to courts are those concerning logistical complications in doing so.

Sometimes, the prosecution will try to show that tests could not reasonably obtain BAC tests within two hours. Whether it be issues with the police cruiser, lack of in-stock tests at the station, absent officers to deliver the test, or any other excuse, there is a possibility that the courts excuse a violation of the 2-Hour Rule. Despite this possibility, this can and should be contested by defense attorneys as there is a good chance that this ruling could be overturned.

How to Learn if Your Case Is Eligible for Dismissal

While the 2-Hour Rule persists in the Pennsylvanian judiciary system, there is still a fight to be had. The prosecution may try to make excuses for the shortcomings of its officers, often costing you and your family a lifetime of unjustified difficulties. To address your DUI with an experienced West Chester criminal defense attorney, please reach out to the Ciccarelli Law Offices at (610) 692-8700 or send us a message by utilizing our online contact form. Our firm offers free consultations for potential clients.